How I Ended Up In Paradise 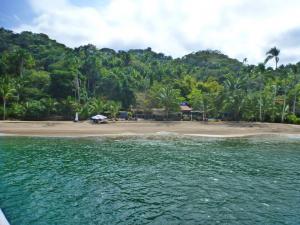 How I Ended Up In Paradise

I get asked the questions all the time…..How did you do it?! Are you independently wealthy? Did you leave a marriage and take him for all he had?! Yup, those are just a few.
Just to clear those up. Nope, not wealthy. Nope, didn’t rob a man of his bank accounts.
But, what I did do, was DREAM!!!

I have dreamt about living this dream for almost forever. The dream of living in a tropical place, with sun, surf, sand, palm trees and doing my art. I have actually been dreaming it much longer than I realized. My dad recently told me, that on a family vacation to Venice Beach, when I was a teenager; I told him I wanted to live there in a tent on the beach. Of course he told me, “Over my dead body”, like any good father would say to his teenage daughter. But that must have been when the dream was implanted in the back of my brain.

From then on, I always wanted it. But it wasn’t until I attended a personal growth seminar, as an adult, that I said it out loud to a room full of strangers and it became an obsession. I spent all sorts of spare time on the internet, researching, reading and dreaming of how I might make that happen. It was kind of like, “When I win the lottery” dream. You think about it, dream about it, plan for it, but you know it’s probably never gonna happen. I would hear all sorts of stories of people that had actually done it, but I had never met any of them. Did they even exist?! Was it just an urban legend?! It’s like Bigfoot. People say it’s out there, but no one has ever seen it! Well, that was how I felt about it. But that didn’t stop me. My plan was to travel to all sorts of fabulous, warm, tropical places and then one day, pick my favorite and move there once I retired. ‘Cause that’s what people do, right? They retire and get to do cool stuff, right?! But I was far from retirement!

I have done many things over the years for work. None of which made me wealthy. I had a 20 year waitressing career in fancy lounges, night clubs, and even a strip club! (That’s a whole other story!) I have painted signs, sold my art, worked on a pressure washing truck, made pizzas, poured ice cream, taught first aid classes, worked on Alberta oil and service rigs as an Emergency Medical Technician, was a security guard, an EMT at a chemical plant, and a 911 operator for the RCMP in Alberta. It just seemed that I never felt I belonged anywhere. Each job had it’s good and bad. But the jobs just got more stress filled and unsatisfying as I went along. I just couldn’t help but think, there has to be more to life than this! I was totally stressed out and almost 80 lbs overweight and I pretty sure I was having panic attacks! So one day, after a long night shift, I went home stressed and miserable, and I called the boss and quit my job. Then I was really in a panic! What did I just do?! Now I am really fucked!! How could I quit a job without having something else lined up?! It was something I had never done. So I crawled into bed and fell into a deep depression, until a couple of amazing girl friends showed up at my house and told me to have a shower, put my big girl panties on and go live my dream! I mean, I had been talking about it forever, right?
So, that’s exactly what I did! In 2012, I put my house on the market, got it all cleaned up, and sold it on Kijiji, by my own bad self! That house was everything to me. I had worked my ass off to buy it, renovate it and damn near pay for it in full. The money I made from that house, was all the money I had in the world, but I was determined, I was doing it!! I had a massive garage sale and sold everything I owned, except for the few clothes my fat butt could still fit into, some art supplies and my Ninja blender (for margaritas, ya know), and put it all in the trunk of my little silver Kia Rio.

The day finally came, the house money was in the bank, a friend was coming along for the drive and I had a hotel room booked for a month in Bucerias, Nayarit, Mexico. That was pretty much the extent of my plan. Why there? Because I had only been to Mazatlan, Cancun, and Bucerias by then….and Bucerias was by far my most favorite. I don’t think my family and friends really believed I was actually doing it. I think they thought, I was having a midlife crisis and would be back within the year. I honestly had no clue, no fear and was on a mission to change my life. There was some serious tear filled goodbyes with my family and friends. Some said they were worried I was going to get killed “down there”. The drive down was certainly an adventure, but I survived! I didn’t get kidnapped or beheaded by the Cartel, I didn’t get pushed off the road into the jungle by highway bandits and I didn’t die of food poisoning. What I did do, was arrived safe, sound and exhausted from my life, in a tiny, magical, Mexican town that I lovingly call home. A place where I finally feel like I belong, where I get to be the person I was always meant to be, and where napping is not a dirty word!

Everything fell into place within the first 30 days and I was convinced I was meant to be here. The Universe wanted me here! I made the hotel manager, Juan, my new best friend. (Ha ha, sorry Juan!) He introduced me to lots of other expats and before I knew it, I had a cute, dark, musty little studio apartment,2 blocks from the beach. Super cheap, and just what I needed! With some help, I had a cell phone, a lawyer, a temporary resident visa, and a new family. It hasn’t come without some challenges. There is the language, which I am still struggling with. The laid back life that I wasn’t used to, but I am totally on board now! And a breast cancer diagnosis, to name only a few. But the 80 lbs of misery and stress melted slowly off me in the scorching summer heat without even really trying.

I am loving, laughing and am happier than I have ever been. I have met like minded people that are now my family, and are no longer the urban legend I once thought they were.
Every single day, I look out my window and still pinch myself. I can hardly believe I am here. Just a small town, Alberta girl, who never gave up on her dream.
I am blessed. I am loved. I am happy!
Tracy Bonin
A Canadian artist, living the dream in Mexico.
http://www.bestofbucerias.com/page_about_bucerias_mexico_1