My First Year In Paradise part 3 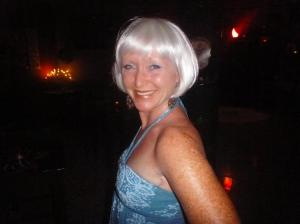 My First Year In Paradise (part 3)
(Warning: may contain swearing and TMI)

Each and every morning I would wake up, look out my window and pinch myself. I still couldn’t believe I was so lucky to be living this life in paradise! I thanked the Universe every day! We were finally on speaking terms. Maybe the Universe had this planned all along. The Universe knew I needed to be in this magical, healing place to face my battle with cancer. I have learned, the Universe is much smarter than I am!

Now I was gearing up for chemo. At the time I had pretty long hair. I knew I would lose my hair. So I figured, if I cut my hair short now, it wouldn’t be such a big shock when I had to lose it all later. No biggie, right?! So I made an appointment at a local salon, and with a picture of a new hairstyle in hand, I sat in the chair and explained why I was there. Then it hit me. Up until then, I looked ‘normal’. I didn’t look sick. No one knew about the cancer, unless I told them. My hair was my ‘thing’. It was long and gorgeous and curly and big and kind of like a security blanket for me. I had awesome hair!! With the first snip, I started to cry. I was mortified! The harder I tried to stop, the worse the crying got. I am pretty sure there was snot. I felt so bad for that guy cutting my hair. He didn’t know what the hell to do with me! There was a lady in the salon, watching me cry like an idiot. I had met her briefly on the beach one day, but didn’t know her at all. She came over, held my hand and she prayed. Thank you for that, Wanda! I needed a friend that day. I hated that haircut!

I met with a chemo oncologist, Dr C. She was awesome. I had written out many pages of questions about the treatment and all the alternative treatments I had been reading about. She was all for adding alternative therapies! Including diet, exercise, juicing, supplements and high dose vitamin C. We decided to do 10 treatments of high dose vitamin C by IV throughout chemo. It made me feel like a million dollars! Chemo was scheduled to start on August 12, 2013. The one year anniversary of living my dream in paradise. Go figure!

There would be 4 treatments over 4 months. I had heard horror stories of people going through chemo. I was a bit worried. But my doctors in Puerto Vallarta were total rock stars! Dr. C informed me of all the possible side effects, and promised me that she would do her absolute best to make it as easy as possible for me. She kept that promise! There was no puking, no feeling like death. And we managed any side effects with the most natural remedies possible. For the most part, I was just tired. Really, really tired. But hey! I live in paradise, where napping is not a dirty word...so I napped! I had some days where I felt….”oogey”. I tried ginger, tea, ginger ale, but nothing worked better than a beer and clamato on the beach! My favorite beach bar kept non alcoholic beer on hand for me on those oogey days. Worked like a charm, every single time!

My hair hung in there for quite some time. At one point I asked Dr. C if the chemo was working, since my hair hadn’t fallen out! She laughed and assured me it was working and it would fall out soon enough. One morning it was coming out by the hand full. I was ready this time. With the help of my buddy Juan, we shaved it off right away. No tears, no snot. It took a bit to get used to and I startled myself when walking by a mirror. But I think I rocked that bald look! Friends offered me wigs, hats, and scarves. My mom mailed me hats and scarves that a friend gave her. They were hilarious! Gwen and I almost peed ourselves laughing over those, they were so ridiculous looking! It was summer, it was too damn hot for hair anyway! I wore a wig once. For Halloween, that was it! At one point, a couple friends and I did a run for cancer in Nuevo Vallarta. I was the only bald person there! I didn’t run. I walked. I don’t know how many kilometers it was, but I cheated! I took a short cut, and still came in dead last!

Everyone thought that this would make me paint great art. They were all looking forward to seeing what I would produce during this life altering event. I was looking forward to that too. I didn’t paint. Not one single thing! Every time I walked into the studio to get started, an overwhelming sense of exhaustion would come over me. Every single time! So much so, that I could barely make it to the couch for a nap. It was weird. I didn’t stress over it. I knew in my heart, my one and only priority was to take care of my body. So when my body said nap, I napped. I would paint later.

My Bucerias family was amazing! They cooked, they sent cleaners, some came to chemo with me. I am truly blessed! The last chemo session was October 15th, 2013. That was also the day my parents flew in to see me. Even though I kept telling them I was doing great, my mom was convinced I was dying and keeping it a secret from her! I picked them up at the airport, an hour after my last treatment. They were staying a month, just to be sure that I was doing well. They would also be around for my consult with the radiation doctor in Guadalajara. So, now I was resting from chemo, and getting ready for radiation.

We put the word out that I would be needing a place to live for 6 weeks in Guadalajara. There was no possible way that I could drive the 4 to 5 hours back and forth every day. Once again, I had more angels walk into my life.